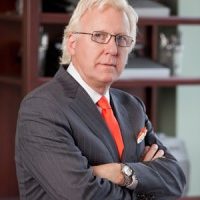 Mr. Edge is a member of the Oklahoma Bar Association, the Tulsa County Criminal Defense Lawyers Association, is on the board of directors of the Oklahoma Criminal Defense Lawyers Association, and has been admitted to practice in the United States District Courts for both the Eastern and Northern Districts. He is also a member of NORML, is a Fellow of the Oklahoma Bar Foundation, and is recognized as a Regent of the National College of DUI Defense. Most importantly, Mr. Edge is a trained instructor for SFST (“standardized field sobriety testing”) and has taught law enforcement on the proper ways to administer the tests. This training makes him uniquely qualified to cross examine officers regarding any tests they may have administered to you on the side of the road.

Mr. Edge been selected as one of the Top Attorneys in Oklahoma—as published by “Oklahoma Magazine’s” Super Lawyer Section—since 2008. In his practice, he successfully defends both felony and misdemeanor DUIs, and aggravated DUI, cases. However, he is well qualified to defend a number of criminal charges, and has recently succeeded in securing a not guilty verdict on a first degree manslaughter charge involving alcohol and drugs.

In addition to defending the criminally accused, he also helps people with the expunction/expungement process, whereby their criminal record is sealed following a verdict of not-guilty or a dismissal of certain charges. This process is invaluable to a number of professionals who must have a clear arrest history in order to obtain certain licenses.

Bruce is 1 of only 12 Regents Nationally who directs the National College for DUI Defense. Record includes not guilty verdicts on First Degree manslaughter trials involving alcohol and drug.

Listing last updated: July 7, 2016 at 12:36 pm
Ready to write your review?
Can you recommend this attorney? Be the first to review them!