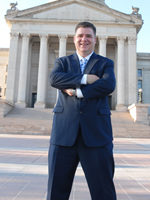 Board Certified in DUI Defense by the National College for DUI Defense, DUI defense attorney John Hunsucker is internationally recognized as a leader in the field of DUI defense. Mr. Hunsucker and his team have litigated thousands of DUI cases in Oklahoma and been retained to consult on cases across the nation. Mr. Hunsucker has taught at numerous DUI seminars and appeared on national TV as a legal expert, commentating on television programs such as In Session with Ashleigh Banfield and Open Court with Lisa Bloom. Mr. Hunsucker is a Faculty member of the National College of DUI and has taught nationally.

As a leading authority in Oklahoma DUI defense, Mr. Hunsucker has coauthored several books on the topic, including Oklahoma DUI Defense: The Law and Practice (two editions), Defending DUI Vehicular Homicide Cases and the Oklahoma DUI Survival Guide (three editions). Mr. Hunsucker’s knowledge of the field is so vast that he was also brought in to help write the Minnesota, Florida, Georgia, Utah, Colorado, Maryland, District of Columbia, Central Texas, South Texas, and West Texas editions of the DUI Survival Guide series.

Holding a Bachelor’s degree from the University of Oklahoma, Mr. Hunsucker earned his J.D. from the Oklahoma City University School of Law in 1997. He is admitted to practice law in all Oklahoma state and municipal courts, as well as the Western District of the United States Federal Court and the United States Appellate Court for the Tenth Circuit.

Mr. Hunsucker spent the first year of his law career prosecuting DUIs as an Assistant District Attorney. This experience gave him invaluable insight into the strategies employed by state prosecutors—insight he uses to the benefit of his clients when defending DUI charges today.

Frequently called upon by fellow attorneys because of his extensive knowledge, Mr. Hunsucker is the only DUI attorney in Western Oklahoma to be named by his peers as an Oklahoma SuperLawyer every year since 2006—an honor reserved for only the top 5% of all Oklahoma attorneys. Mr. Hunsucker has also been selected for Inclusion in Best Lawyers for several years and has been chosen as the Best DUI Attorney in Oklahoma

Mr. Hunsucker handles hundreds of alcohol-related driving charges every year, ranging from municipal DWIs to DUI felony murder II cases. He is certified as an Administrator and Instructor of standardized field sobriety tests and Operator and Maintenance Supervisor for the Intoxilyzer 5000 breath test machine. Mr. Hunsucker is also certified on the Intoxilyzer 8000. There are only 12 functioning Intoxilyzer 8000s in the hand of law firms in the country, and the Hunsucker Legal Group co-owns two of these, which are the only two in Oklahoma.

The Hunsucker Legal Group has argued successfully to the Oklahoma Appellate Courts several issues relating to drivers license issues that resulted in thousands of clients having their license returned without any license revocation.

Listing last updated: July 7, 2016 at 12:16 pm
Ready to write your review?
Can you recommend this attorney? Be the first to review them!