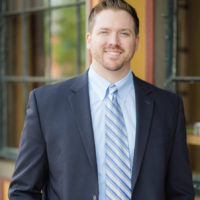 John Burns is the President and principal founding member of The Burns Law Firm, LLC. John Received his B.A. from Truman State University and his J.D. from Saint Louis University School of Law. John is admitted to the Missouri Bar, the United States District Court for the Eastern and Western Districts of Missouri, as well as Districts throughout the United States.

Mr. Burns is the recipient of the 2015 “Top 10 Under 40” Award from the National Association of Personal Injury Attorneys. He regularly litigates cases in state and federal court and has appealed decisions through the Missouri Court of Appeals for the Eastern District of Missouri and The Missouri Supreme Court. He concentrates his legal practice in the areas of Personal Injury and Worker’s Compensation, Employment Law, DUI/DWI and Criminal Law, and Civil Rights litigation.

Listing last updated: August 25, 2016 at 9:26 am
Ready to write your review?
Can you recommend this attorney? Be the first to review them!