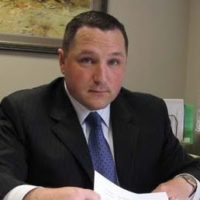 Lee was raised on a cattle ranch outside of Polson, Montana. At seventeen (17), Lee joined the Montana Army National Guard and went to Basic Training at Fort McClellan, Alabama.

Following Basic Training, Lee attended college at Eastern New Mexico University (ENMU), in Portales, New Mexico. Lee graduated in 3 1/2 years from ENMU and received a Regular Army Commission as a 2nd Lieutenant in the Field Artillery. Following the Officer Basic Course at Fort Sill, the Army sent him to Fort Lewis, Washington. While at Fort Lewis, Lee served in the 3rd Brigade Combat Team of the 2nd Infantry Division as a Fire Direction Officer, Platoon Leader, and finally as a Battalion Fire Support Officer.

Lee left the Army and came back to Oklahoma to attend law school. Lee graduated from the University of Oklahoma, College of Law and received his Juris Doctor in May 2000. Lee graduated with Highest Honors and ranked 6th in his class at OU.

After graduating from OU, Lee went to work as an attorney with NASA, at the Johnson Space Center, in Houston, Texas. At NASA, Lee served as an Installation Ethics Official, Procurment Law Attorney, and International Law Attorney.

While at NASA, Lee was offered an opportunity to move back to Oklahoma and work for the U.S. Department of Veterans Affairs (VA). Lee went to work in Muskogee at the VA Medical Center and Regional Office as an attorney. Lee represented the VA in all matters in Eastern Oklahoma and was the only attorney for the region. While at the VA, Lee handled countless Employment Law cases before the Equal Employment Opportunity Commission and the Merit Systems Protection Board. Lee was also responsible for investigating, negotiating, and defending all of the Medical Malpractice cases that came out of the facility.

While employed at the VA, Lee was invited to work for a Federal Judge in the Eastern District of Oklahoma. Lee worked for Judge Steven P. Shreder in Muskogee, Oklahoma, as a Federal Law Clerk before being offered a Felony Prosecutor position in the Tulsa County District Attorney’s Office.

Lee worked in the Tulsa County DA’s Office, rising up through the ranks to hold the positions of Major Crimes Prosecutor, and as the Chief of the Gang Prosecution Unit. While in the office Lee tried 23 Felony Jury Trials and 7 bench trials.

On May 1, 2010, after a decade of experience in criminal law, civil litigation, and high end transactional work, Lee left government service and entered private practice to focus on criminal defense.

Listing last updated: July 7, 2016 at 12:35 pm
Ready to write your review?
Can you recommend this attorney? Be the first to review them!