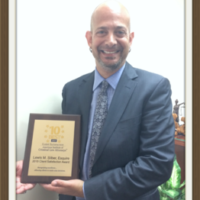 Mr. Silber is a local attorney who was born and raised in Montgomery County, Maryland, and graduated Springbrook High School in 1985. Mr. Silber received a bachelor of Science from University of Maryland in 1989, and his Juris Doctorate Degree from University of Baltimore School of Law in 1993. Mr. Silber has been practicing for 22 years, and he has also volunteered much of his time in both the Montgomery and prince George’s County State’s attorney’s Offices. Lewis M. Silber, Esquire is the founder of THE SILBER LAW GROUP, LLC, established in 2006. Mr. Silber is an experienced litigator who represents individuals in criminal, and serious personal injury cases. Mr. Silber experience includes criminal defense, civil litigation, workers compensation, premises liability, hotel liability, general liability, contract disputes, insurance coverage disputes and subrogation. Mr. Silber has been a frequent speaker at educational conferences and at the educational sessions of many professional associations. Mr. Silber has been awarded very high rating in both legal ability and ethical standards by the (BV) in 2013, and one of the 10 best attorneys for the state of Maryland by the (AIOCLA). Mr. Silber enjoys spending time with his wife and children, riding motorcycles, and driving muscle cars.

Listing last updated: June 20, 2016 at 10:59 am
Ready to write your review?
Can you recommend this attorney? Be the first to review them!