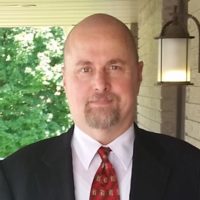 I grew up in Springfield, Missouri, and attended Greenwood from kindergarten through high school. After graduating in 1978, I attended Missouri State University. I initially thought I would become a math teacher, but after a year I realized I was better suited to writing short stories than learning calculus. I switched my major to Creative Writing and graduated with a Bachelor of Arts in 1982. In May 1985, I received my law degree from the University of Missouri-Columbia School of Law and opened a law practice in Ava where my grandmother lived and where my grandfather had been sheriff.

I served as the elected prosecuting attorney of Douglas County from 1987 through 1990 and realized that criminal law would be the focus of my career. Since 1994, over 90 percent of my practice has been limited to criminal defense, traffic and driver license issues. I have volunteered as the defense attorney representative on the Christian County Drug Court for approximately seven years and have served on the Greene Country DWI Court for the past four years. In May 2015, I became a member of the teaching faculty of the National Drug Court Institute. My education and experience allow me to find creative sentencing solutions for my own clients.

Listing last updated: June 15, 2017 at 10:20 am
Ready to write your review?
Can you recommend this attorney? Be the first to review them!