Menu
Learn More About DWIs
Back 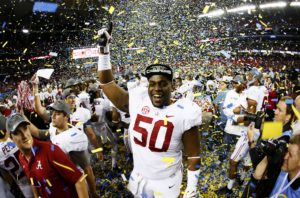 Alphonse Taylor, starting offensive lineman for Alabama, was arrested on July 17th for drinking and driving. The arrest came after the police got a report that Taylor hit another vehicle just before 9:00 a.m.

The police conducted sobriety tests and used a breath anaylzer device and ultimately determined that Taylor had been drinking. An arresting officer said he “immediately noticed that Taylor’s speech was very slow and he appeared lethargic.” He also noted that the player dropped his phone and “struggled and swayed” when trying to pick it up.

Taylor Arrested After Blowing a 0.0 BAC

However, Taylor passed the breath analyzer test, blowing a 0.0% Blood Alcohol Contentration (BAC) and the officers did not mention that they saw or smelled alcohol on the scene. Taylor had told the police officers that he may have hit his head on the steering wheel during the collision, but he was not given any immediate medical treatment. The officers also did not allow Taylor the possibility that his behavior could be due to trauma or shock from the accident.

The day after his arrest, Alphonse Taylor posted this message to Twitter, saying “Isolated events does not define ones character…”

Isolated events does not define ones character…..

Taylor’s attorney, Jason Neff, looks defeat the states case. “I have reviewed the reports and based on the blood alcohol concentration of .000 and him having just been in an accident, I believe the case has some points to work with for a defense,” he said. “As always, I need to get all the information and facts before we can make a complete analysis.”

There is a systematic issue with arrests based solely on sobriety tests. They are not mandatory and have no legal consequences except that a failed test will strengthen the police officer’s case against a citizen. They are based on very little (if any) scientific basis and were created in the 70’s as a way to give probable cause to arrest someone for a DWI/DUI.

Shortly after the news broke, Alabama coach Nick Saban suspended the player “indefinitely” saying that a DUI offense will “put other people in danger.” Saban has not commented since it was revealed that Taylor passed the breath analyzer test.

Alphonse Taylor is scheduled to appear in count of August 16, where his attorney will fight the conviction. We will be following the news of this case and update the story accordingly.

What is “Wet-Reckless” Driving?DUI: Know the FactsLife After a DWI : How to Handle the Repercussions and Move ForwardKnow Before You Blow: What To Do If Asked to Take a Breathalyzer TestMost Common Questions After Getting A DWIMiranda RightsEverything You Need to Know About a Drinking and Driving ChargeHow to Find the Right AttorneyDWI, DUI, OUI: What’s the Difference? Ohio OVI & DUI Laws
Posted in:
Updated: August 1, 2016 at 4:34 pm
Previous Post
Next Post